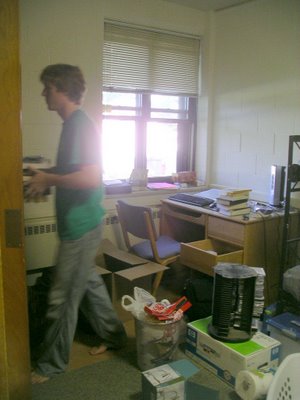 We dropped off S1 at school yesterday. Left at 5:45 am and started unloading about 9 or so. Husband left by 10:30 so that he could get to work and I left by 1. The room was pretty together by the time we left and son and I finished buying his books. (I told him to take advantage of mom and her credit card. He did not argue.)
Somehow this child lucked? (time will tell) into a dorm of seemingly upper classmen. There is a quiet time that starts at 7:30 each night except Friday and Saturday. He got one of the largest rooms and the roommate seems fine on intial meeting.

I wish that I had taken photos of all of the stuff that people brought. One person brought an armchair. Literally all of the comforts of home. I thought that we had a lot until I realized that S1 was bringing his computer, dvd's, cd's and other electronic stuff that wasn't even around when I was in school. Then there were the books that we had prepurchased during orientation that had to be lugged back. Coffee pot and carpet that we bought at Lowe's as it was cheaper to lug it there than buy it there.

What did we forget? Nothing much. Husband is building shelves for the desk and will take those down next week. Shelves that were not that great were $65.00. We can do better. We will also take his desk chair as he has room so far to put his other desk chair that came with the room. He actually has his own dresser in his dorm as opposed to the one I stayed in for orientation.

The most needed thing for moving in. A Hand Truck. We had one. There were rentals there and a Christian group was renting them for free in the parking lot.

Next week we have to help move our dau. into her new apartment which she will be sharing with a girlfriend. I am dreading it. I had hoped this ritual would stop once she finished univ.

jodi said...
This comment has been removed by a blog administrator.
11:25 PM

My in-laws helped us move from Florida to Virginia 12 years ago. The boys were 3 and 5 and we did it in one day. I drove a van with my mother-in-law, a son, 2 cats and enough junk to fill it full. My husband drove the rental truck with a trailer hitched to it. The other son and my father-in-law rode with him.

Next time we pay someone to move us.

Is it hard to let go of S1 and start him off on his college years? He's lucky to have such loving parents - and a cool dad making him bookshelves and a mom that makes jam.

The last time we moved - also about 11 years ago, my husband drove our stuff down in a small size rental truck from Cambridge MA to NYC. It was a ride that should have taken 5 hours but took almost nine due to bumper to bumper traffic. He swore that we would NEVER MOVE OURSELVES AGAIN.
And he meant it.

jodi said...
This comment has been removed by a blog administrator.
9:13 AM

I've go to start watching my spelling before I hit enter.
Yes, I go through periods where the house is too quiet and it makes me sad. I'm afraid that one day I'll hear an incredibly sad song on the radio and will just sob. I'm overdue for a good cry.