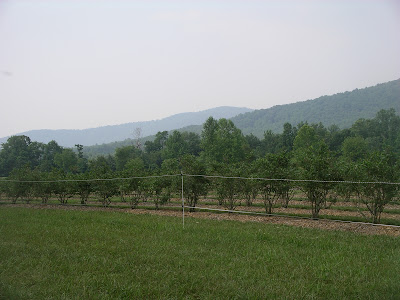 View from the raspberry/blueberry patch.


Today I picked 8 cups of raspberries for $5.00. Not a bad price at all, which is why I love to pick at this particular place. Very few people come and most come for the blueberries.

This year is different however. Mobs of people descended on this berry patch before it opened at 8. By the time that I got there at 9 the patch was picked out of blueberries. Not a problem though. I took my basket and went over to the raspberry patch.

About 15 to 20 minutes later that patch became quite heavy with families who, when finding out that the blueberries were picked out, decided that they had to go home with some sort of berry. It was like a plague of locusts. Children crying as it was hot and buggy - the air was filled with gnats. Adults invading the personal space of others.

The biggest crime at the berry patch were the people who picked unripe blueberries or allowed their children to do so and then dumped them on the ground. Maybe a class on berry picking is on order.

Anyway, I will be back out there on Wednesday at 8 am. I have enough for jam but now S1 and I need some for eating.
Posted by jodi at 11:32 AM