/A Tissue Box and Tears 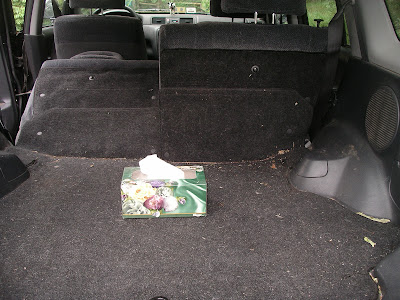 I've thought about this post for awhile but still have not come up with what I'm going to say. Emotions are expected when taking the child to college for the first time but the second year? It's supposed to be old hat.

Tomorrow we take S1 back to the university. 24 hours from now the car will be packed to the top, and bicycles hooked on the back (yes we need to take 2 for one child:-).

I am not a mom whose life are her children. I do have outside interests and friends. A job that sometimes keeps me up at night. But I'm still shedding some tears over this trip.

--- You can say that these feelings have to do with the shooting there in April. I don't have the luxury of saying that it doesn't. But I also believe in the university and the fact that the shootings could have happened anywhere - so am not sending him back with fear.
And it's not like I won't be going making the 5 hour round trip more often than my body would like -- there now is a girlfriend who lives near us.

It's the whole thing of saying goodbye. I hate goodbyes.
Posted by jodi at 9:14 AM

I understand. Each milestone in their lives seems to take them a step away from us. We know that's the way it's supposed to work...but it's hard. My oldest graduated from college but lived at home the whole time -- even still, we hardly saw him from 7 a.m. to 11 p.m. He is living at home now but will probably move out within the year. I just can't think what it is going to be like without him in the house. My middle son was in the dorms only 45 minutes away -- but, still, it wasn't the distance so much as that step toward adulthood. Setting the table and not setting his place (or forgetting and putting a plate there out of habit) and walking by his empty bedroom were hard.

I've been using the kleenex box myself for a few days, but for a different reason. God is in control!!!! I believe nothing happens unless He permits it. I appreciate your honesty. Something I value highly.
Susan

I certainly remember that first trip taking the first one off to college. I couldn't even walk past the Goodbye card section in a Hallmark store without needing tissue. I'm not a clingy mommy either. There's something about the letting go process that is filled with the weirdest emotions. Blessings on all of you as you go through this again...

I went through all that with my boys when they moved out after they'd finished their 4 years of university...I was lucky, the university they went to was right here in the city:-) When they moved out to be on their own though, that really hit me and I can say that quite a few tears fell!! It truly is hard to let go, no matter how old they are!! xo

Hi Jar,
Thank you for commenting on my blog - nice to meet you! I haven't got any children, so I can't comment on this post, but I have had a look at your blog, and will say I love your kitties, especially Heinz - cute name!