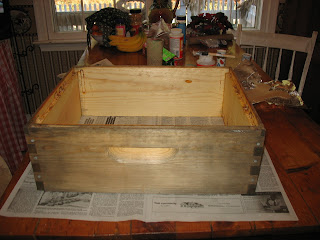 exists no more. I believe due to cold but also due to lack of food.

Bee Hive #2 was one that I established in the spring. It took off like a rocket and in fact I got more honey from them than I did from Hive #1 which was over 1 year old. But then this hive was more aggressive. When trying to feed them in July and August I got stung a lot and became quite paranoid of them. Stopped feeding for awhile and then started in again. However, an odd thing always happened during feedings. A large number of bees would drown. This happened in July and August and then September. My other hive, which was fed the same way didn't have that issue. I still have no concrete idea of why. No food seemed to make it inside to the hive. I went to feeding them with an entrance feeder. Obviously that didn't work.

The other hive is doing fine. Actually feels like there is enough food for the winter.

So now I'm in the process of painting the boxes that I didn't have time to paint when hive 2 came. Am also cleaning out the dead bees. Not many to clean out probably due to mass drowning.

What I will do differently in the spring with a new hive:

Relocate. I thought that hive number 2 would be in a better location because it gets more sun. But now I'm thinking that because of less tree protection it was getting down drafts that made it colder. This next hive will be place behind trees, with less direct light, like hive 1. I will also try and buy bees from the first guy who sold me bees. His bees were gentler. I will also try to space the hives further apart though lots of people have hives next to each other and they seem to do fine.

I am reminded of a kindergarten field trip to the local farm stand. The owner raised bees and he collected old CD's (at the time you could get those free AOL CDs everywhere) to put on the hives. The hole in the CD fit around the hole in the opening. The bright colors attracted the bees and he said that the differences helped them find their hives. His hives were lined up in rows fairly close together. I hope you have better luck with your new plan. Not much fun to get stung!