My class went on it's 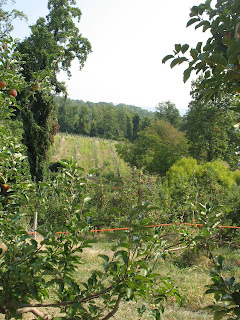 annual trip to the apple orchard yesterday. It was blistering hot. Luckily we were the first school to take advantage of the events, but even so we were not finished until close to 2 1/2 hours later. After, I went back to school to do a few things and ran a few errands. Then was sick for the rest of the day. Heat related I'm sure.

Later in the afternoon, when I got the phone to check for messages there were several from S2. His apartment (read personal room) had been robbed. He had called the police and the insurance company. He had talked to apartment management. (A roommate had been robbed the day before). No sign of entry and his door to his room had been locked. Sigh. And no, it was not another roommate.

So he packed up his car with his stuff and came home for the weekend. What bothers him most was his guitar, a beautiful one that he bought this past summer. Everything was insured and the insurance company has been very nice in their talks with him.

S2 has an amazing attitude. Though he was upset, he also has the ability to make lemonade out of lemons. A great ability to have.
Posted by jodi at 5:05 PM

I am so sorry that happened to S2. I can tell you from my experience at working in colleges - they are frequently hit up by crime rings. That sounds dramatic but true. You've raised him well though. What a statement about his character that he can remain optimistic.