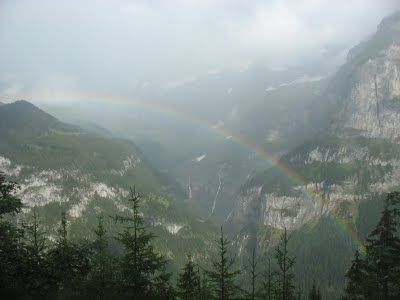 we took a train up the mountain to Murren, Switzerland. It was raining but the views were spectacular. We were in a conversation with a young Korean guy who was traveling by himself and lonely when there was a yell in the train car. A HUGE rainbow had formed over the valley. Absolutely breathtaking. To celebrate, the Korean guy brought out a box of chocolates that he had bought in Paris and the three of us each had a piece.
Posted by jodi at 4:01 PM

WOW!!!! What a magnificent sight. It certainly deserves to be your latest Header pic. :-)