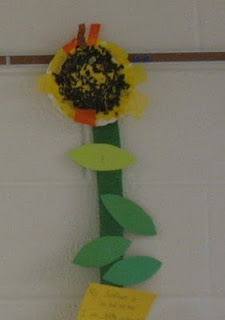 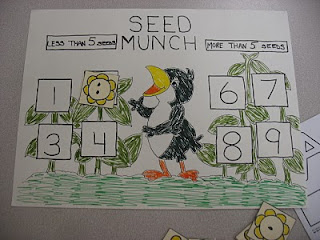 Last week we worked on the letter S. Isn't it a hard letter to write for 4 year olds you might ask? Yes and no. Some want to write it backwards, some can write it correctly and a few could not write it at all. We look at it as introducing letters and letter sounds. S is an easy sound to hear.

Not shown in the photos are the big letter S's that we made . Added two googly eyes to one end of the S and made it into a snake.

We made sunflowers (idea expanded from Mailbox magazine). Each child was measured and their sunflower was made to be as tall as they are. Paper plates were painted yellow. Seeds added in the center. A piece of crepe streamer that was as tall as them cut and attached to the back of the plate (mostly by them - some of us learned how to work a tape dispenser for the first time). They added precut leaves to the stems by way of stapler (also a first for many of them). Then I added a note that said:

Mailbox magazine also has a kindergarten worksheet magazine that our school gets. Instead of handing out a worksheet I enlarged a worksheet on posterboard. I had two children come to my table at a time and count the seeds on a sunflower card and match it to a number. A small game but it was perfect for their attention spans and it requires no writing. We could just focus on math.