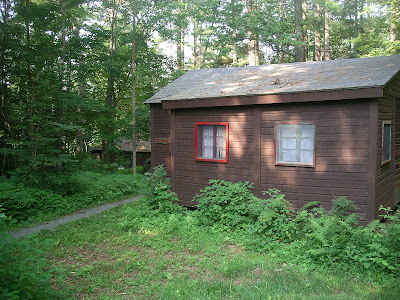 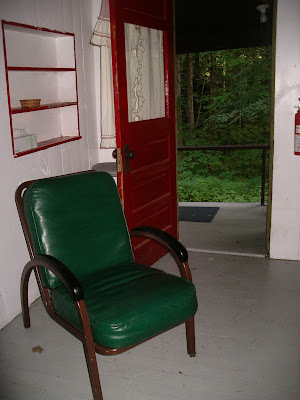 It's time for Show and Tell over at Kelli's . Take a look and read some interesting stories and see some great photos. (I'm sincerely jealous of the garden photos :-)

This week sharing are photos of the cabin that we are staying in - until tomorrow when we get switched to another. But that fact does not really come into play today. This is a story of this particular cabin.

15 years ago, when S2 was almost 2, I read about this place in a book about family vacations. With 2 boys 4 and under it seemed like a practical idea to find a vacation place that we liked and park ourselves for a week. The kids could swim and play, we could read and watch them. And the cost at the time - as we cooked are own meals - did not break the bank.

Our current cabin was the first cabin that we stayed in. At the time we lived in Florida and it was not like a breath of fresh air but after 2 days of travelling an actual breath of fresh air. Our doors and windows did not need to be locked in order to keep "bad guys" out. We traded in big palmetto bugs for mice - a step up in my opinion. And the best and saddest part was that our oldest son discovered that if you went up to a door where there were children inside and knocked - they actually came outside and played. A novel concept for him as very few people in our neighborhood at the time allowed their children to go outside and play. Everyone stayed inside - a very depressing thought.

S2 was small enough to be bathed in the kitchen sink - there is no tub and I couldn't figure out how to bathe him in the shower. (Hard to believe that he was that small when I look at him now).

Over the years we have made good friends here. S2 hangs out with a group that has promised to get together in 10 years. I think that some of them will do it.

This is our last year staying at this place. Ownership has changed. In two years it will cost thousands to reserve a slot here. I'd rather put 2 kids through college.
But we have enjoyed it. S2 will have great memories and S1 also, even though he no longer comes up here with us.
Posted by jodi at 10:56 AM

What a great cabin and location to vacation with boys! Enjoy your memories..

It's wonderful you've had such a peaceful spot to bring the family for vacation every year but what a shame that this year will be the last! That's when you wish things wouldn't change so much...the new owners probably will make quite a few changes and raise the cost by quite a lot!!

What a pretty place and I just love the red door !

How neat to have a regular vacation spot! I'm sure your kids will have wonderful memories to last a life time.