You Will Never Meet the Queen 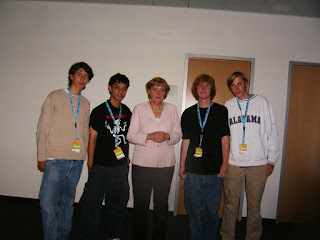 is what I used to tell the boys when they were little in a futile effort to stop burping and belching at the dinner table.

The first time that S1 went to Germany his hair was long, his clothes that he took were a little ratty and his sandals were held together with duct tape. His german teacher and his parents PLEADED with him to get a new pair of sandals but he maintained that his sandals were fine.

Unfortunately this photo taken at a CDU party (Christian Democratic Union) does not show his feet because he did wear the sandals to the party. "Mom, you said that I would never meet the queen but I did meet the next chancellor of Germany wearing my duct taped sandals."