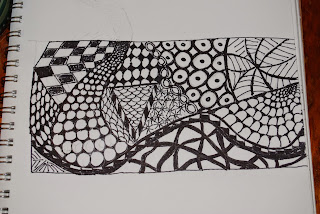 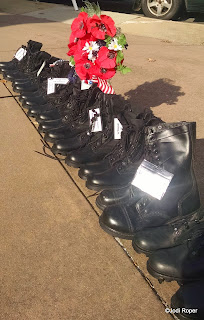 I walked over to the front of the church where the display of boots worn by soldiers who had died in Iraq and Afghanistan were.  A young reporter wanted to interview me to ask my reaction to the event and tried to sweeten the detail by adding "I'll make you look even prettier on tv.:  But flattery got him no where and I smiled and declined his request.  I felt terrible for the soldiers and their families.  Photos of children that will never be held again by their dads and letters from friends about what they had lost and the void that was left were heartbreaking.  But mostly what I saw in my mind were the pair of boots hanging from the rafters in my dad's workshop area.  Dad had been in the Air Force and then in the Air Force Reserves.  He loved it.  He spent years as a Navigator on C130's.  The weekly flight path was over our house and when my brother and I were young we would stand in the backyard and wave at the planes as they went overhead.
Posted by jodi at 9:48 PM No comments: 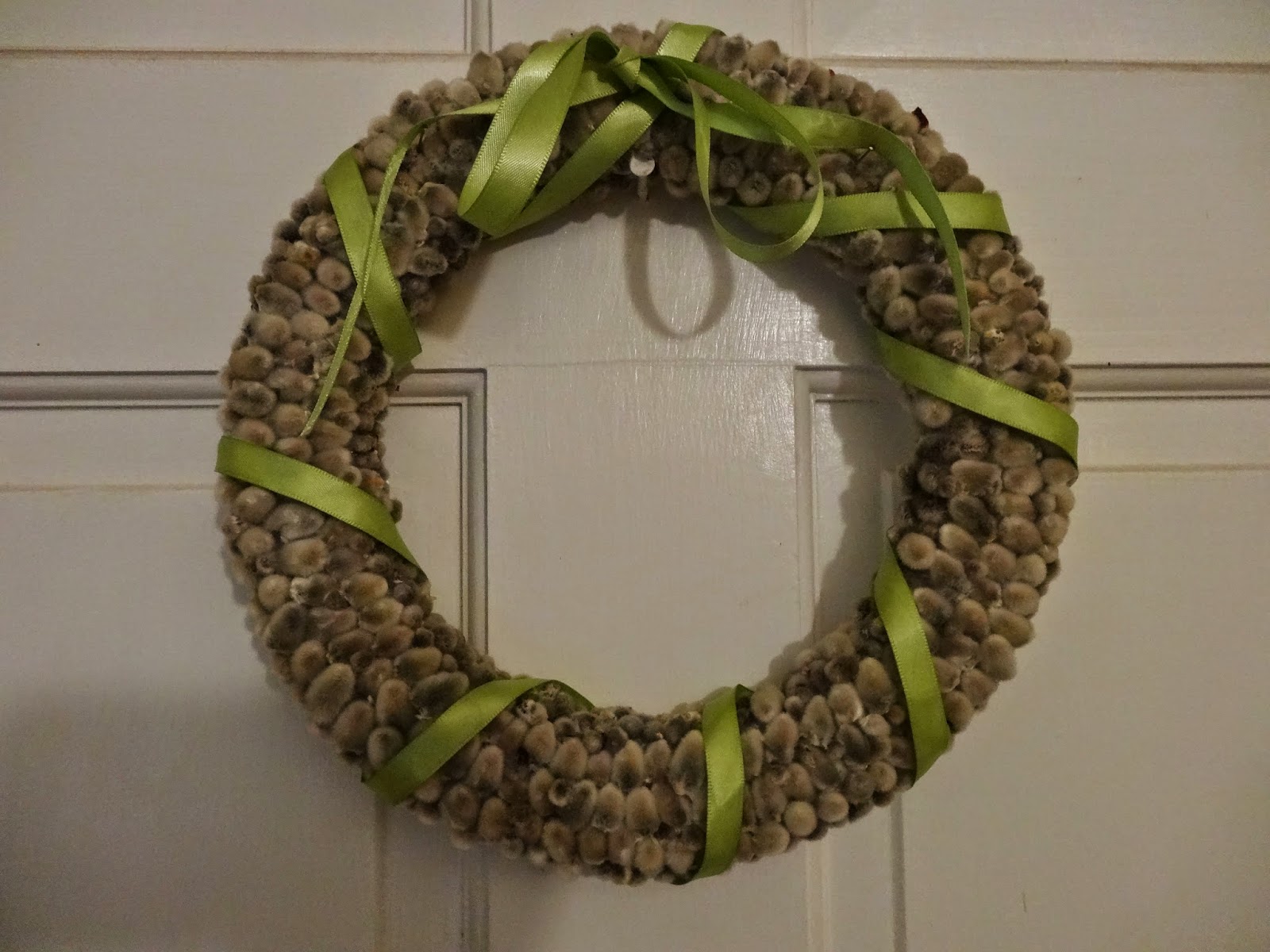 I love this wreath.  Made from a styrofoam form with pussywillow buds glued to the front and sides.  Time consuming but easy.  The buds from the branches that I bought last year were nice and plump and gave a better look.  New ones were narrow and fit into tight spaces.  I used tacky glue which worked well.

I also realized that I had two different colors of buds - pink and black.  Enough contrast that if you look closely you might figure that there were two different colors in the wreath.  But standing a few feet away it really doesn't matter.
Posted by jodi at 6:23 PM No comments:

I Saw/I Conquered --- Rehoming a Swarm of Bees

My husband called me over to the hive area on Saturday to alert me to some strange activity at the bee hive.  I took one look and I knew; the bees were getting ready to swarm.

If you are new to bee keeping a swarm is when there are too many bees in the hive and at least half of the hive leaves with the queen to find a new home. (Wikipedia)  My swarm went 15 feet or so from the original hive. 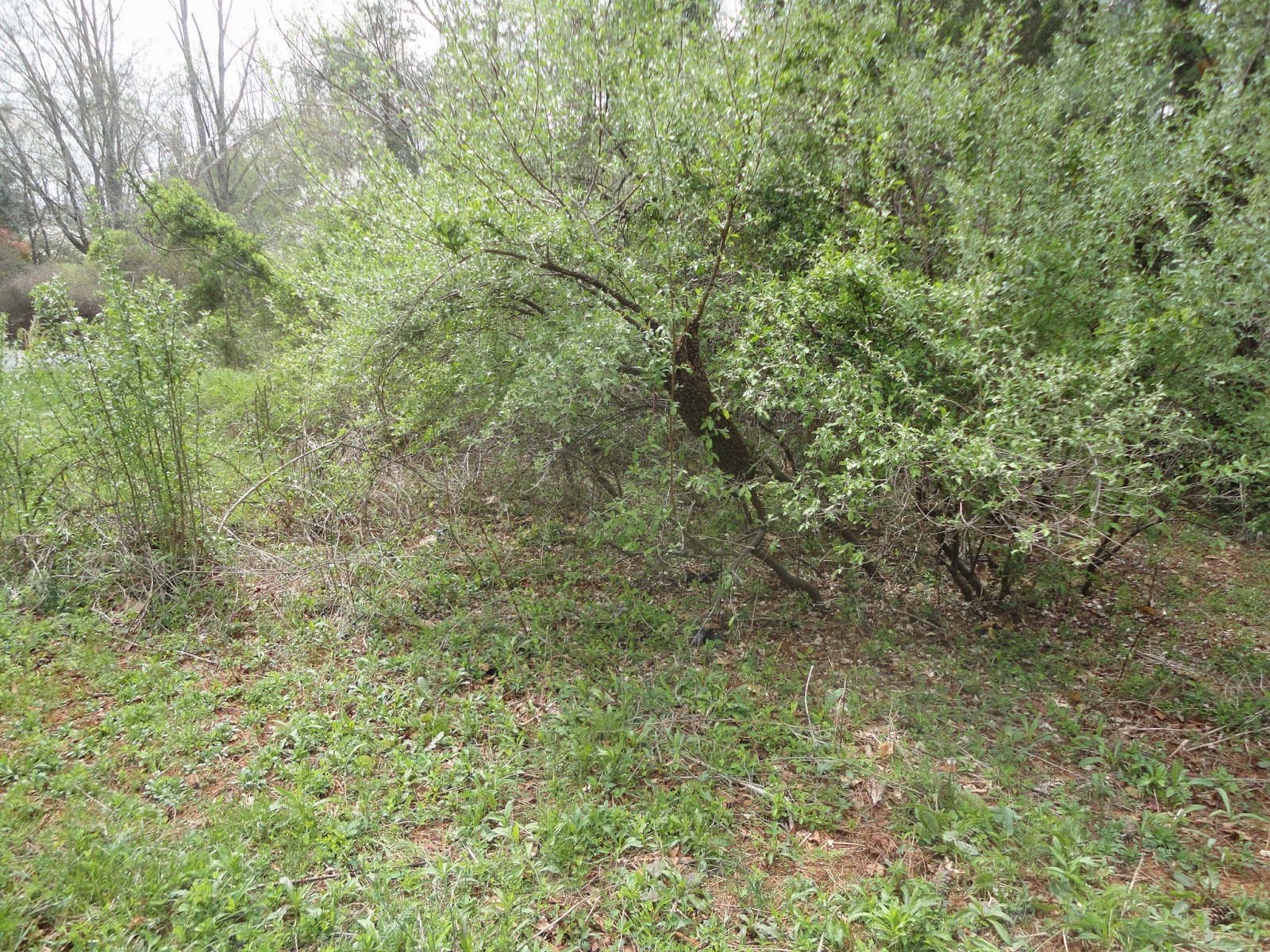 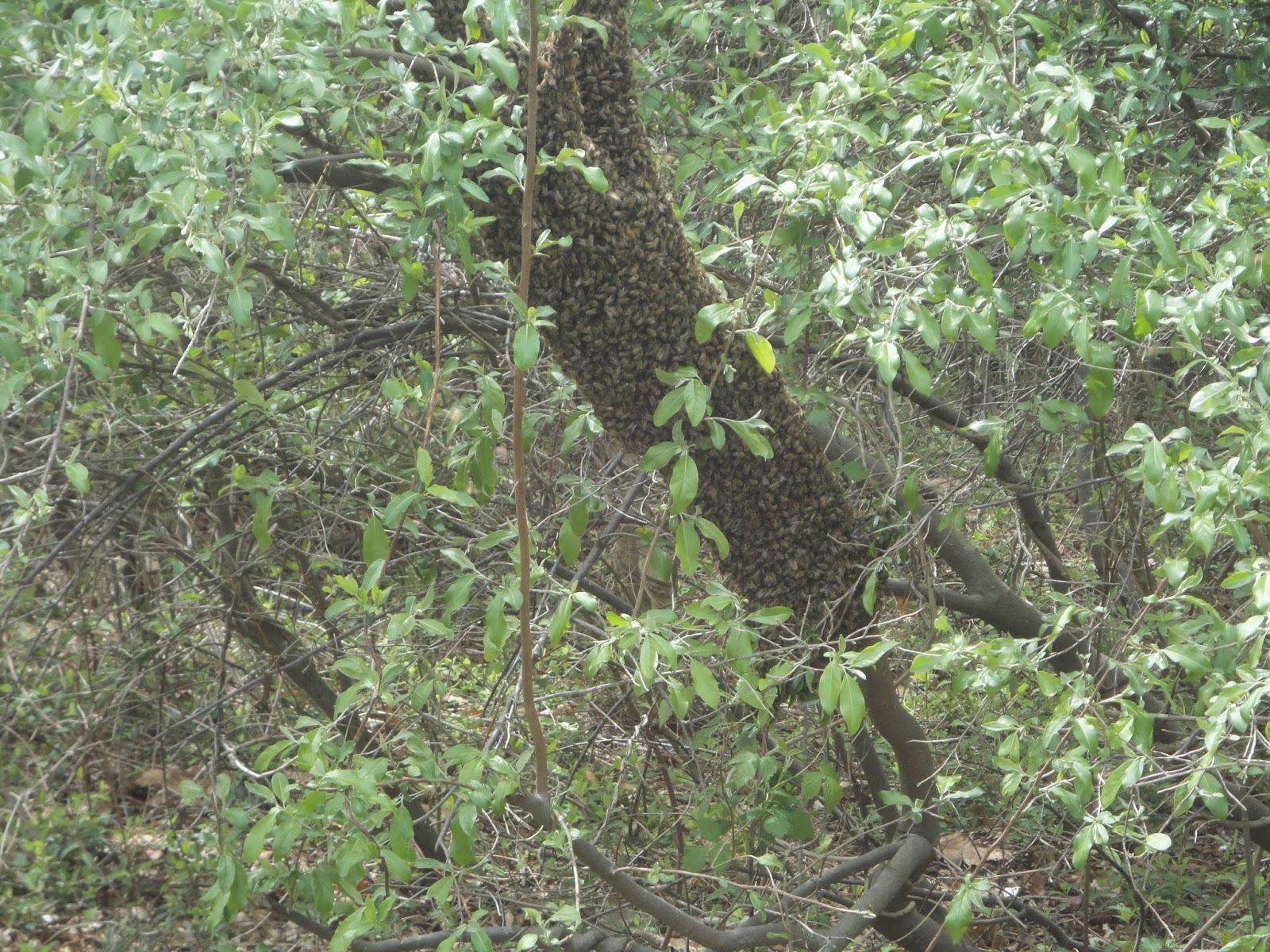 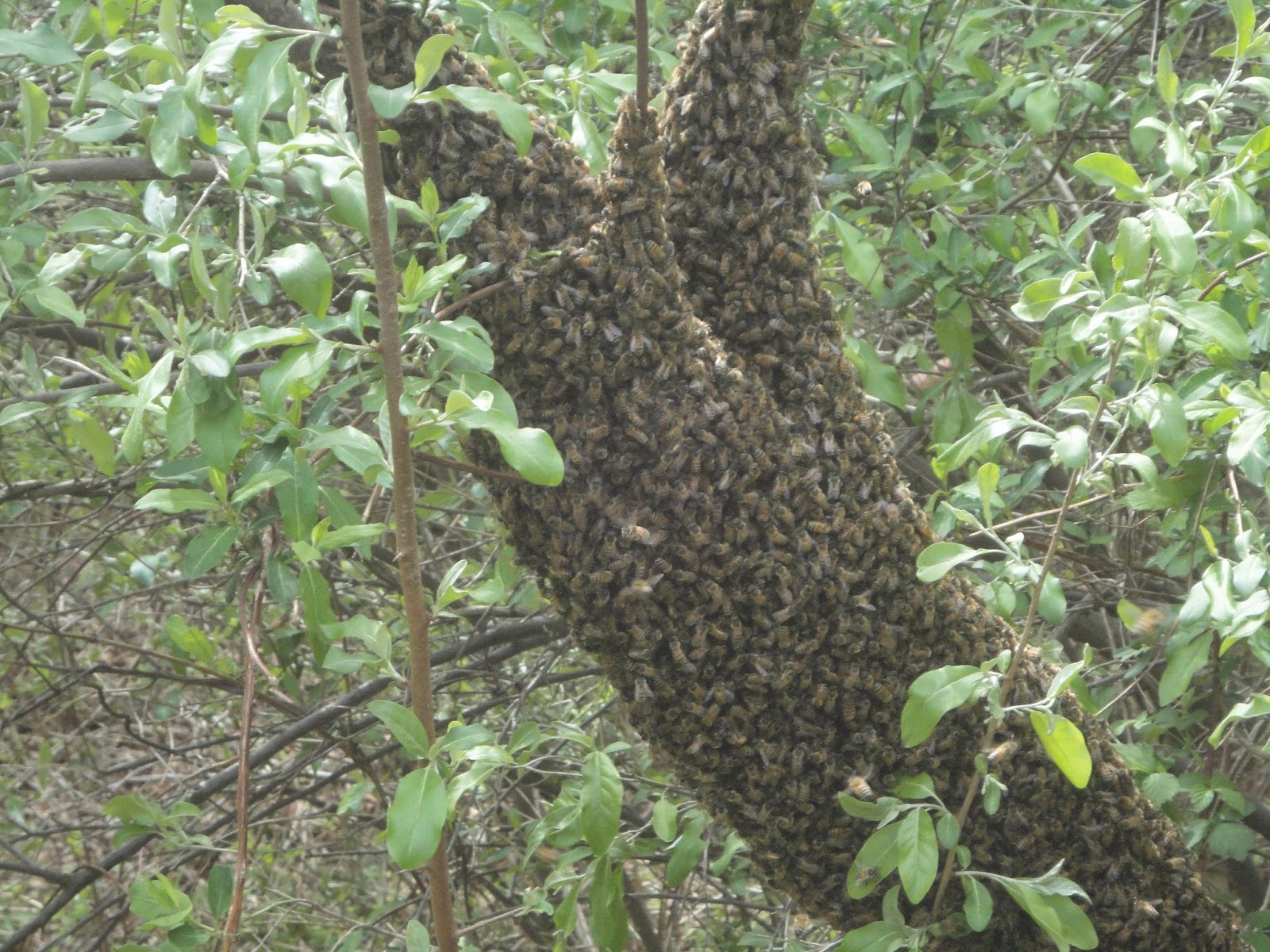 We got a couple of old bee boxes and set them on some concrete blocks that we happened to have. And I added some organic honey to the boxes.   My other half kept me supplied with nets, matches for the smoker and a lot of moral support.

Taking the bees off of the tree was not that difficult.  For the most part they were calm.
They were intertwined together so they came off of the tree like a web.  I dumped net loads of bees into the boxes.  To get the last bit off of the tree I trimmed some branches and stuck a large box under the branch.  Then I took a broom and swept the bees down into the box.  This was the only time that the bees were really angry - they were guarding the queen who was at the inside of the mass.

I put some honey on a few frames and put those into the box and added a few frames of honey from the old hive.  Then I went in for a couple of hours.  Came out later to find all of the bees had moved into the new hive.  I put a top on it.

The bees have been there 3 days now and seem to be happy.  I will be opening the hive up later in the week or next week.  I want them to be happy and so will not disturb them much for awhile.
Posted by jodi at 9:23 PM 2 comments:

The Planting of Tulips/Thinking Outside the Box 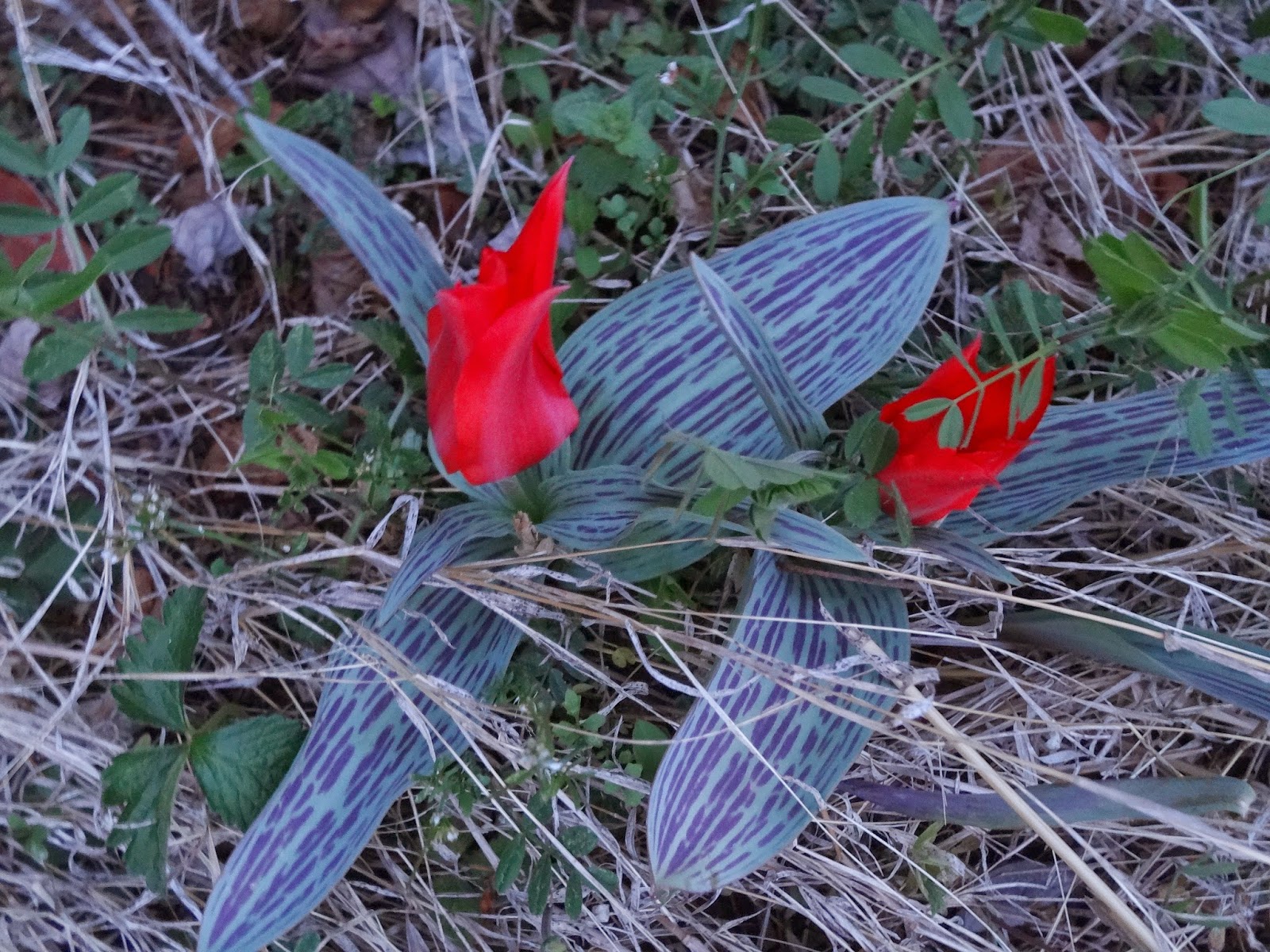 Shhh.  Don't tell anyone but I broke planting rules/instructions.  A couple of years ago I went to a Tulip farm and found the above growing in the field.  The instructions from the owners were when you picked a tulip to take home you dug up the bulb with it.  And in about the same time the thought came to mind that I could replant the bulb immediately with the greenery on it and get new tulips the following spring I was told that I could not plant the bulb because once picked the bulb was worthless.

Which begs why pick the bulb in the first place? . . .

I didn't listen.  And was especially happy that I didn't as I tried to order bulbs for this tulip and received notice in the fall that they were not going to be available.

After the first year one tulip appeared.  This year two came up.  I like the flower but love the striped foliage.  Of course I can't remember the name of this particular variety.

But it shows that with gardens sometimes rules are flexible and after a long hard winter the surprise of it is definitely enjoyed.
Posted by jodi at 7:13 AM 2 comments: 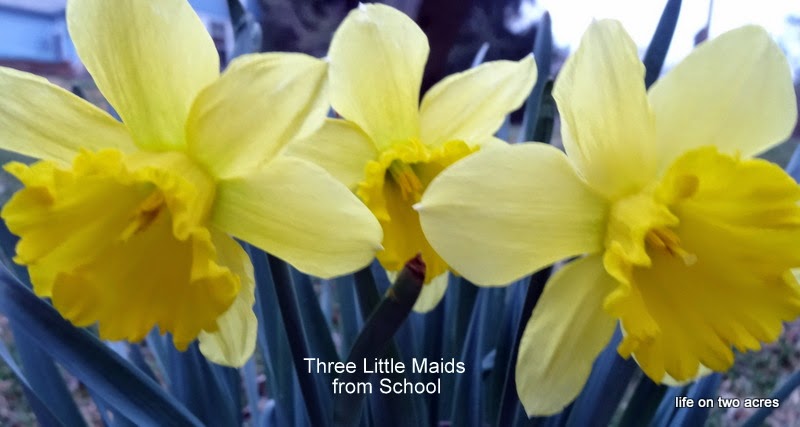 Time to sing and dance.
Posted by jodi at 8:02 PM No comments: 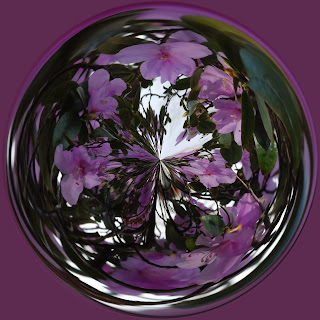