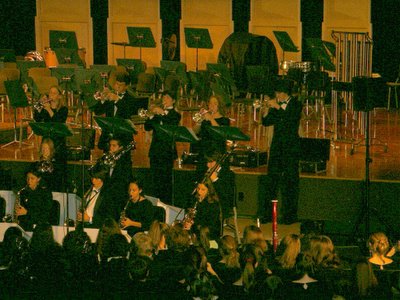 Band pictures never turn out good with a digital camera but here is my best one. S2 had a great solo in a jazz version of Sleigh Bells and had great audience response. I hate to say it but the concert went downhill from there. A few too many ill tuned instruments and some odd renditions of music for the choir. And the entire music department's rendition of Hallellujah Chorus still makes me shudder.

And while I'm on the topic of concerts - please make your children sit with you while you are enjoying the concert. Too many parents let their children (ages 6-10) run wild. They like to play with the seats, talk, giggle and run amok. My favorite was the man who brought his obviously sick girl (about 12) and sat a few rows in front of me. That poor child coughed horribly through one song at least every 10-15 seconds. And even with Dad letting her cough into his chest it was still loud. Dad took her to an area near the exit to watch and she still coughed and it echoed there.

My biggest pet peeve was the amount of people who did not know that you don't clap til the song is over. When the conductor still has his arms up in the air DON'T CLAP. And YES, the program that was given out listed all three songs that were to be played in the medley.

I feel better now. Time to start some Santa projects for Tuesday and watch Holiday Inn. And wish for snow that starts before school does.