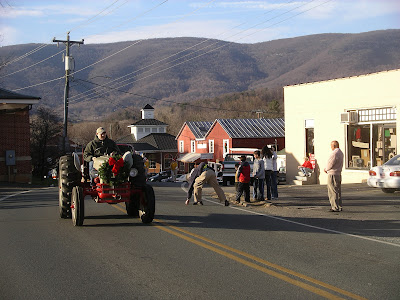 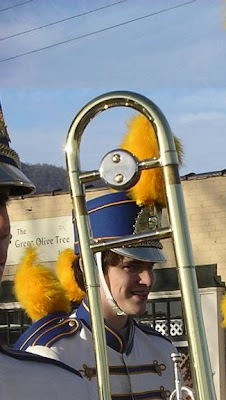 It took longer to get check in uniforms at the end of the parade than it did for the parade itself. The color guard from the local private school was first, followed by a fire truck, then the band itself. By the time the band finished the parade route, were safely back on their bus and us parents who were there had loaded some of the drums and tubas into our cars, the parade was over and Santa and Mrs. Claus were coming into the firehall parking lot. (It would have been shorter but the antique fire engine could not make it up a hill and had to be towed.)

As you can tell by the photo, S2 is thrilled to be in the parade and cannot wait for the next one.

The tractor was one of several that were in the parade. This photo shows about 1/3 of the skyline of the small town where S2 goes to school. In the photo you can see the library on the left, the tower for the Dairy Queen (a social hotspot) and some of the local businesses.

It is very pretty though and it was a beautiful day for a parade.

**I did not get a photo of the broom twirling brigade. They are quite good and their brooms still have the plastic covering the broom part.

Do you live in a small country town? What is that like?

There is a small city 6 miles to the east of us and a small town that is exploding in growth 6 miles to the west. The little town that we live in is even smaller but everything is becoming one huge area. I will write about it sometime.