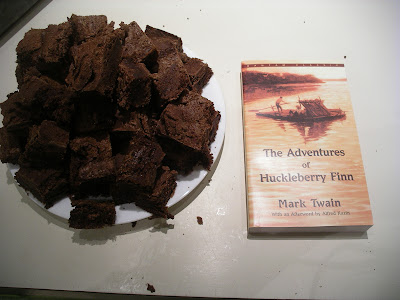 Last night S2 and I were up late reading Huckleberry Finn. Midway through reading I got a craving for brownies and decided to make the recipe that is in the back of the book "Murder on the Rocks" mentioned below. Lots of sugar involved. The brownies were good the first night but even better this afternoon when a chocolate fix was required. The frosting recipe that was included in the book did not turn out right. I could not get my burner hot enough for the soft boil stage on the candy thermometer and maybe cooked it too long. After cooking, the directions said to beat it with the mixer until cool. I did it til luke warm and it hardened as I was pouring it over the brownies.

Don't know if I will try the frosting again but the brownies receive a definite thumbs up!!
Posted by jodi at 4:18 PM

Brownies and books are always a winning combination ....

I remember reading Huckleberry Finn during the summer that I was pregnant with my son Ben. I enjoyed reading every page and savored it in a way that I certainly did not in high school. It's funny how you can return to a book at different times in your life and be touched by it in a different way.

It sounds corny, but I felt like God brought me to that book to let me know that I was having a boy.