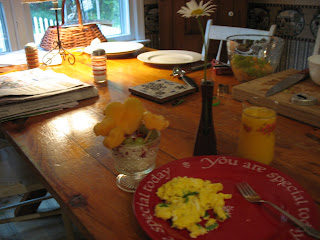 I decided to be a big boy today and wake up to my own alarm and make my mom (excuse my informal tone) breakfast. S1 helped, though woke up 15 minutes later than I did (what a slacker!). Since he's a loose vegitarian I figured he could make the eggs and I'd stick myself to the fruit cup. I think I possibly went overboard on the fruit cup; as you can see I used a cookie-cutter for tiny birds (maybe ducks?) and then a large heart in the center. Sad thing is I actually had to make a run to the gas station to pick up some toothpicks. I actually made the run to the gas station because there's a store next to it that I was going to buy a flower from, but they were still sleeping like every other person should be at such a ridiculous hour. But I did manage to find a daisy in the yard (though I should have found a daffodil to make it fit with the blog). 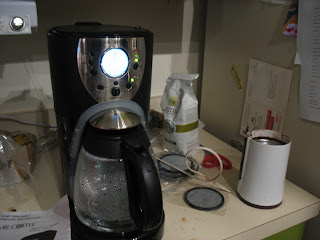 The family got her a couple of presents. Husband bought her a new, top-notch (I assume by the looks of it) coffee maker, S1 bought a bottle and a pot from a thrift store, and I had the idea of getting my mom some coffee, but since I don't drink coffee I had S1 figure out what kind of coffee to buy her. Then of course my mom bought herself some gifts which included two new books, though I'm far too lazy to go upstairs and look at them to get their names (but I'm fairly sure she'll update later when she reads them). 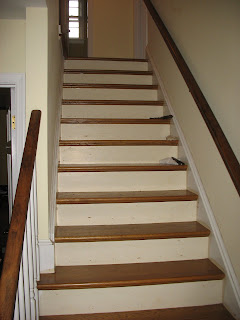 But this picture represents one of her "gifts." She's been dying to tear the red carpet off of the stairs for a long time now and Husband finally gave her the OK. She was thrilled to find out that there were finished hardwood floors underneath the red carpet and let out multiple squeals of joy. The only downsides to there being no carpet, though not in her perspective, is that the stairs now creak louder than they used to, but also I nearly fall every other time I go down the stairs since I'm not used to the carpet no longer covering them. I suppose I'm used to the friction caused by the carpet, or perhaps the height of the carpet so my feet and brain are looking for that step to be sooner than it actually is.
Regardless, I'm writing this blog post to let my mom enjoy her Mother's Day without any distractions, though she enjoys writing and I'm pretty sure she'll be a little sad to see that I took today's update away from her. But to that I say, "HAHA!" and also, "Happy Mother's Day, Mom."

I enjoyed reading your post S2, I'm sure you made your Mom's day with such sweet gifts and thoughtful breakfast! It was a cute idea to hijack her post for the day an post this tribute to her :)

For some reason this post really brings tears to my eyes. What a fine son you are! Your mom is super cool - so it must run in the family!

S2 hijacks the blog! Very sweet! (He should remember this should he ever date a blogger!) Hope you had a wonderful Mother's Day! I see it was off to a nice start. Oh, and the trip to the gas station to get toothpicks= A+ for effort!