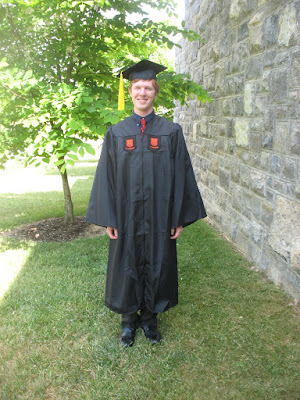 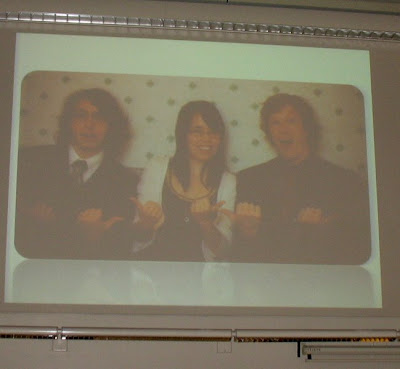 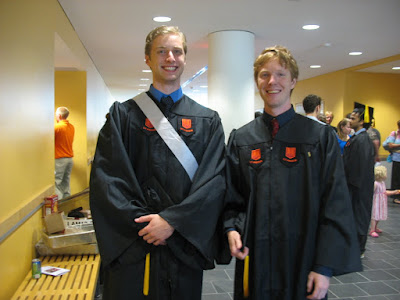 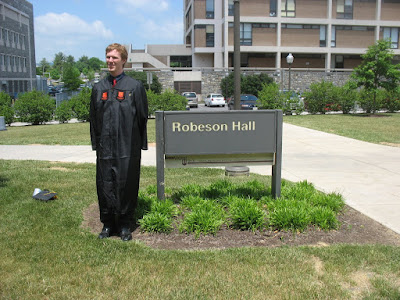 Your brother graduated yesterday. As you knew, we skipped the first graduation which was Friday night. As it turned out, that was a very good choice. There were huge thunderheads forming in the late afternoon when we arrived and by graduation time there was some rain and lightening. Graduation was delayed by an hour. At 9:30, when we were sitting on some steps outside campus eating ice cream, there was still lightening.

We went out to eat for dinner at a place that served ridiculously large portions for your dad and brother. The gyro that I ordered came in a more manageable size. Then we went to Rita's for ice cream. An interesting place. Mine came with soft serve vanilla on the bottom, raspberry ice in the middle, and soft serve on the top. Interesting (and good) textures together.

Then we went back to the apartment where we ate red velvet cake (that your brother and Baking Girl - center in the photo) made as a surprise for us. So good!!! Not very sweet and the best texture. We looked at photos and I turned in early. Not a lot of noise and your brother's floor futon provided one of the best nights sleep that I have had lately. I seriously think that it was the size (king) in addition to the comfy mattress. And yes, I've started whispering about the king size bed that I would like. Ha!!

Graduation went fine. Photos of the graduates when they were little were shown. I would not have recognized Getting Married Friend if his mother had not been sitting next to me. But the other 2 roommates were easy to spot. I have that on video for you.

There was concern that the usual professor that takes photos would not be able to make it due to his flight being delayed by ash. But he was there so there should be many photos online soon.

We brought back some of your brother's things and I will go back later this week after work one day and get more stuff. He will be home Friday.

We missed you yesterday. Roommate that is moving to Arizona got back together with his girlfriend by the looks of things. You would have enjoyed hanging out with them.

We read your itinerary every day and are pleased that it sounds like you are going to learn so much in Africa that will help you in your studies and job next school year. And it sounds like fun!