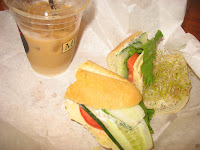 I looked at the Black Bottom Cupcakes that I made two evenings ago and decided that they were not potluck food. After all, most of us at the dinner are/were preschool teachers and can I say that we really don't like cupcakes. At least not at school. Messy - chocolate being the worst. Then there are the icings. Especially that nasty blue that likes to stain faces.

So I went out and bought more ingredients and decided to put them into a bundt pan. Chocolate first. Cream cheese filling next. Then another layer of chocolate. Decided that 350 would be the temp and pulled it out maybe 40 minutes? later. Let it cool. It came out of the pan perfect. Yipee!

Raspberries went into the blender next. Pureed with a little sugar added. I like the tart taste.


At the party the cake was cut into thin slices with raspberry sauce poured over it. But I could see it on a plate with a drizzle of sauce put onto the plate first and maybe a tiny drizzle over. Then a garnesh of whipped cream (the real stuff) with a sprig of mint and a fresh raspberry.

The photo above shows lunch. A sandwich from one of my favorite places - a gourmet restaurant that is hooked onto a gas station. There is also a mini coffee shop to the side and that is the only place from where I will drink iced coffee.
Posted by jodi at 1:52 PM