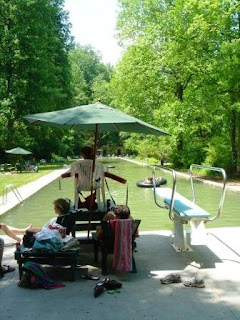 word for the day on Wednesday. The Board of Supervisors meeting started at 2 and for three hours a large group of us spoke - for and against - the local pool being turned into a day camp for children as well as keeping the pool available for members at the same time. Oh, and the camp would have Thursday night sleepovers each week.

I initially understood and could sympathize with the anger. Many of the people against were in their 70's and 80's. A few were younger than myself. They moved to a place in the country for the solitude.

But was that realistic?

Years ago, the church that we belonged to had neighbors that were afraid that a preschool would be coming to the building. Though the couple had 3 children they informed the church and others that they did not like the sounds of children. A preschool has yet to be started or talked about there.

Back to the pool.

One younger man (30's) wanted the pool destroyed as it was too close to his house and he felt broke county laws by existing. Unfortunately for him the pool has been here for 100 years and his house is only 30 years old. Other adjoining land owners also mentioned that they did not like noise, though they also knew that they were buying next to a pool. Another lied and said that there was nighttime noise. (The pool is closed at night). Some were afraid that more kids there meant urine in the pool and that the local creek would be polluted. Another woman started yelling that she wanted the pool to have only 10 members and a 6 ft high fence around it.

My sympathy started to evaporate.

I was for the change. The clientele at the pool loves young people. We have several people above 60 who want to engage younger people in genuine conversation. My sons, who were pool managers, got to know several older people. The pool is also the perfect place for children to safely explore the local streams and play. A win-win situation for pool members and campers. This is what I spoke about.

We won. And so did the others though they still might not recognize it. The sewer system for the facility will be updated. There is a noise level that cannot be gone over at night. No more than 200 people can be at the pool at a time. The facilities will be updated. Lighting will be regulated. Children will arrive mostly by one bus. A few parents will drop off and others will be able to walk.
The pool will get a needed infusion of cash to hopefully stay open another hundred years. Green space will be conserved.

In the end we all were winners.
Posted by jodi at 9:01 PM

Hurrah! Things such as that are never easy but hopefully everyone will eventually be satisfied.
Blessings,
Barb

Congratulations. What a cool looking pool.