Yesterday, while it was raining, the 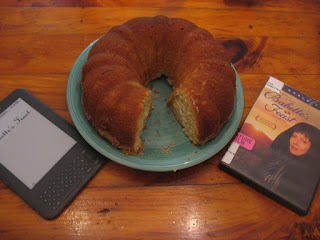 dogs and I watched Babette's Feast. I had read the story, which is part of the book Anecdotes of Destiny and Ehrengard by Isak Dinesen, Thursday night for a book club that Cornflower hosts. We will discuss the book a week from today.

Babette's Feast is about 2 sisters who live in Denmark with their father who runs a congregation in a small village. Small and desolute. As the father puts it to a gentleman caller - My daughters are my left and right hand. How can I give one of them up? (paraphrase) And so, even when the father dies, the girls stay in the village out of duty and love to their father.

Babette arrives later in the story. A refuge from France she becomes the housekeeper/cook for the sisters. On the 100th anniversary of the father's birth she gives the sisters and the few congregational members that are left a French dinner.

The story in written form is beautiful but stark. And when words are few it is easier to use ones imagination to fill in the gaps. In the movie, even though it did not deviate much from the book, it was harder to ignore the reality of the sisters and everything that love and devotion to God and father cost them.

The movie was done very well. The barren land that the tiny village sat on seemed to give little. The only giving seemed to come from the sea in the form of sea creatures to eat and of course Babette. The dinner scene was fantastic. And even that is a poor word to explain. For that you will have to watch the movie.

By the end of the feast I was in tears.

So, why the cake in the photo you may ask. My mother introduced me to the showAmerica's Test Kitchen when I was visiting them earlier this spring. The cake is their recipe, Sour Cream Coffee Cake. I wish that I had a piece during the movie as the cake is certainly worthy. Sour cream cake with a delightful cream cheese filling and an almond topping. Husband loves cream danish and I made it for Father's Day - but we had to sneak a piece today.
Posted by jodi at 5:30 PM

Never read the book, but we loved the film. Thank you for an idea, for renting from Net Flix!

What a super looking cake! Yummmm!

Happy Father's Day to your husband.

I loved that movie and think of it from time to time...it must have come out in the mid 80's? I remember Babette making that incredible meal with the stark background of that isolated Danish coastal town. You captured it perfectly. Now I want a slice of that coffee cake! Hope you had a lovely Father's Day.
EVI

Thanks so much for the suggestion that I watch the movie. I will certainly rent it. Mmmm, sour cream coffee cake. That's exactly the kind of dessert Norwegian Americans like me would eat for lunch, "lunch" being the afternoon coffee break about 4 pm - with good strong coffee, of course!