And the trumpet came through 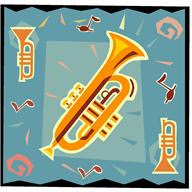 last night in a blaze of glory. I was at the Messiah Sing In at the local big university. It was the 44th year and has always been led by the same gentleman.

It is an evening of singing, humor, and for me watching the violinists play. Also waiting with anticipation for the trumpet player. Last year I did not go. The previous few years to that were a disappointment. The trumpet players treated it as something cavalier. Thinking that maybe they were better than the music and therefore would show up and ace it without giving it the respect that Handels Messiah deserves. And every year that attitude bit them and disappointed the audience.

Last night 2 girls showed up. One with a letter jacket on. And the other with short braids. Age maybe 20 or so. I watched Girl with Braids with hope. Conducting to herself as the music was approaching her part. Serious. Into the music. I could feel the hope rising in myself . . . .

She played beautifully. The trumpet player that so many of us had been waiting for. So wonderful was the playing that the conductor had us do the piece over again. We gave her a standing ovation then. And we gave her another at the end of the evening. The smile on her face was priceless.
Posted by jodi at 5:13 PM

It must have been very wonderful! Especially since it isn't always *done right.*

So glad she was shown your appreciation.

"The holly's up, the house is all bright,
The tree is ready, the candles alight:
Rejoice and be glad, all children tonight!"
~~P. Cornelius