Baseball and a Finale? 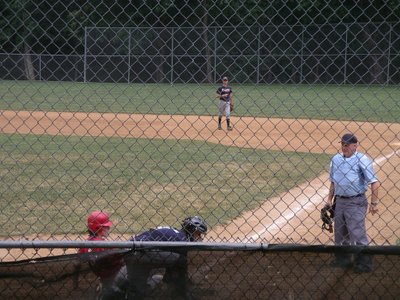 This week S2 has finals. My rule for tonight was that he could only play baseball til 8 and then had to come home to study. After the first inning the score was 7-1 in favor of the other team. Our lonely run was scored by S2.

The second inning S2 came in as pitcher and did well but there was no enthusiasm in the crowd or team as an eighth run scored. Then S2 came up to bat and hit a single. He then stole second. Then he tried for 3rd but had to retreat back to second when the catcher threw the ball back faster than S2 thought. S2 slid back into 2nd and the throw went into center field. S2 got up ran to third and high tailed it to home and SCORED!!

I was screaming and I don't EVER do that. I usually cheer but this time I was screaming for that child to get home. 8:00 came and husband and son asked if he could stay. I couldn't say no (physical harm from the other parents did enter my mind:-).

Everything turned around. The crowd became festive. More scoring was done and we ended up winning 10-8. S2 struck out 14 people in 5 innings. This may have been his last baseball game of his youth and I am so pleased that he had a game like this. Couldn't have happened to a nicer young man.