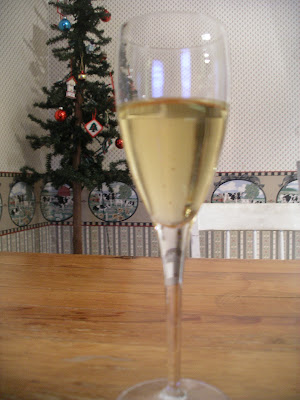 about trying to be a good, responsible role model for the boys then I would be drinking more than this one glass of wine.

S2 was involved in a 4 car wreck this afternoon while on his way home from school. There were 5 cars involved. The first abruptly stopped in the middle of the highway for a dog. The number 2 car was able to swerve around the first and 3, 4 and 5 rearended the car in front of them. S2 was in car 5. He thought that he had ABS brakes but he does not. Hit the brakes like he did anyway and slid into the back end of car 4. Did no damage to the car he hit but his truck is not driveable.

Oh, and the first car left the scene.

All the kids are fine. We were all very lucky. They all know each other. S2 says that 3 of the girls were crying pretty bad (before I arrived) and it "was hard" to calm them down. Anyway, S2 has a court date for March for following too closely and then he and I will take 2 nights of driving classes.

I think that I need another glass of wine.
Posted by jodi at 8:34 PM

Oh my God. Thank goodness he is fine and no one is hurt. What a shock. You must be very very upset. I'm sure he's shaken up too.

Skip the wine - you need a vodka tonic.

I honestly thought that I should just skip the glass and go for the bottle.
But tonight (Friday) I am feeling a little better and I'm sure that tomorrow will be even better still.

Stick to the wine and save me a glass.
Love, DAD