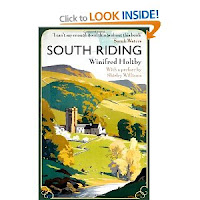 This book appeared to be overwhelming at first. A long, long list of characters; everyone with their own story. But as the story went along all of the individual stories became intertwined which was appropriate as the setting was in a small village. Small villages are like that. Everyone knows everyone else - for better or worse.

The story is about Sarah Burton, a new headmistress of the local girls school and Robert Carne, a landowner who's luck is going downhill. As neither of them are an island the book also tells the stories of the people/friends that the two have dealings with.

Written in 1935, South Riding is ahead of it's time. Communism, sex (alluded to), scandal, it is all between the covers and written with a frankness that most of the characters themselves never allow themselves in their conversations. But then that also was 1935 when people tended to keep their private lives private - even from the ones that they loved the most.
Posted by jodi at 11:29 AM

First time I've looked in, Jodi, but I saw you had commented about Midge (in South Riding) on Flowers & Stripes blog. I really enjoyed reading this book even though it was over-long, but the mark of a good book, I think, is when you're sorry it's ended, and I was sorry.
Margaret P

It was a good book wasn't it. Cornflower picks such great books. Thanks for stopping by.