Derecho - Our storm had a name. 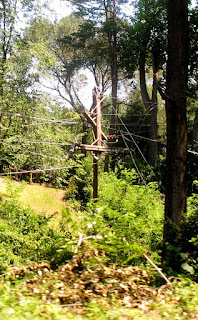 /dəˈreɪtʃoʊ/; Spanish pronunciation: [deˈɾetʃo]; day-RAY-cho) is a widespread, long-lived, straight-line windstorm that is associated with a fast-moving band of severe thunderstorms. Generally, derechos are convection-induced and take on a bow echo form of squall line, forming in an area of divergence in the upper levels of the troposphere, within a region of low-level warm air advection and rich low-level moisture. They travel quickly in the direction of movement of their associated storms, similar to an outflow boundary (gust front), except that the wind is sustained and increases in strength behind the front, generally exceeding hurricane-force. A warm-weather phenomenon, derechos occur mostly in summer, especially during June and July in the Northern Hemisphere, within areas of moderately strong instability and moderately strong vertical wind shear.

The power came back on Wednesday night.  Almost exactly 5 days without.  We lost food in the fridge and freezers.  But . . . we grilled one night and had S2 over for dinner after he went to our state's capital to take his Medic exam.  HE PASSED!!  Dinner was grilled pork loin and strawberries on pound cake with OJ to drink.  We sat in the front yard at a little iron bistro table that husband salvaged from his parents house.
We have kept the garden going with diligent watering.  The dogs get hosed down.  I should say mostly Bella.  Snoopy hates water.
We watched the Euro cup soccer game at a new to us local pub.  And we went back to the pub to watch a baseball game a few days later.  Lots of reading got done.  Also discovered a new breakfast spot.  The highlight were the chocolate milkshakes that we had at the in town Burger King on the evening of the 4th.  (We had spent the day finishing the cleaning out the sheds and basement at my mother-in-laws old house in the capital.  And getting our first hot showers since the power was out).  The milkshakes were so thick and covered in whip cream with smiley faces drawn in chocolate on the top :-)!
About 6000 here still without electricity.  Storms forecast for Sunday.  So I'm working on laundry and other things to make sure that we are prepared just in case.

**First paragraph courtesy of Wikipedia.
Posted by jodi at 12:03 PM

Glad you got your power back! Congratulations on S2's passing his exam and graduation. And, hi! Nice to have caught up on some of your news.