A Present from the Dogs Tonight and the Night Before Christmas 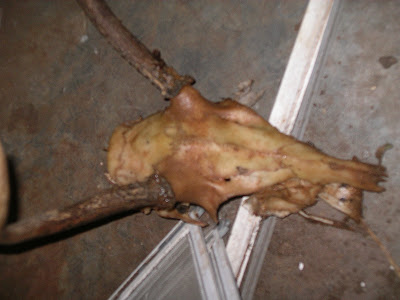 Twas the night before Christmas
and after two cups of coffee
My heart was racing
though my eyelids were droopy.

The stockings were finally found,
by looking through many a drawer.
Moths had eaten a large hole in one.
"Dammit", I swore.

Children were playing on computers,
alongside their beds.
Oblivious
of the long night ahead.

And I in my sweatpants and papa in his cap
were sitting there wondering
"Did we find all the crap?"

When out on the lawn
o where it was dark,
the cats started to hiss
the dogs began to bark.

For what to my wondering eyes should appear
(After finding my glasses)
but eight tiny reindeer.

With a little old driver so lively and quick,
I said, "Who is that?"
My husband hissed "It's St. Nick."

Santa knew all the reindeer names,
Called them by the correct ones.
I was slightly envious
As I have trouble with the names of 2 sons.

Up to the top of the house they did fly.
I excitedly pointed it out to husband,
Accidently knocked him in the eye.

As I drew back my hand and was turning around,
St. Nick came down the chimney with a large bound.

His clothes had soot on them the color of mud,
After a fair day of rain that is such a dud.

He bypassed the cookies
Stopped with his task
To take a giant sip,
out of the beer flask.

He filled all the stockings and turned with a jerk
and went up the chimney shaking with mirth.

He hopped in his sleigh,
To his team gave a call
And I heard him exclaim -
Merry Christmas Y'all!!!
Posted by jodi at 8:18 PM

Merry Christmas JAR! And please don't stop blogging. I would really miss you and your cool life.

God Bless you and your family with a new year filled with good health and much laughter!